The British Transport Police is arguably the oldest police service in the UK. In 1968 one of the co-authors, Mike, joined the Force as a Police Cadet having been rejected by Birmingham City Police due to being ‘underweight’ – a situation he later rectified! In those days officers in the BTP had limited jurisdiction and were often referred to in not always affectionate terms as ‘the railway police’. Local Home Office forces tended to ‘rule the roost’ (Some of the photos are courtesy of BTP History Group and BTP Social Media)

G20 protest in the City of London, involving happenings, street food and some police battering. 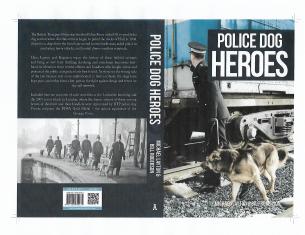 particularly in respect of major incidents and murder investigations as well as terrorism. As pay and conditions, equipment, training and laws changed over the decades the BTP have increased their profile dramatically. They now play a key role in combating terrorism and in London, Birmingham and Manchester in particular you will routinely now see BTP Firearms Officers. A number of murder investigations have also been led by BTP Senior Investigating Officers and you are just as likely to see Home Office Forces requesting Mutual Aid support from the BTP in respect of large-scale public order events. The helmet badge might be different but they have stood ‘shoulder to shoulder’ with their colleagues from other Forces on numerous occasions. The BTP Dog Section was founded in 1908 and was the first in the country. The section also plays a key role in preventing terrorism and providing public reassurance. There are indeed many facets to the Force some of which are covered in the three books shown. BTP ‘characters’ also feature in both of the co-writers historical crime fiction books ‘Black Over Bill’s Mother’s’ and ‘Keep Right On’.