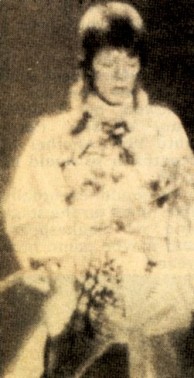 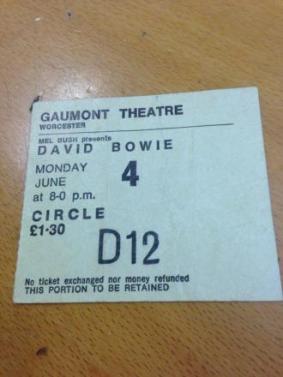 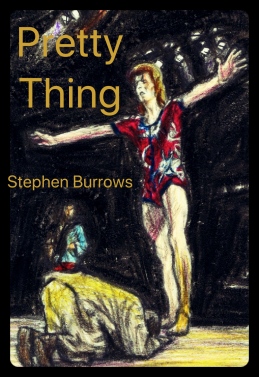 On 5th June 1973, the Ziggy Stardust tour rocked up at the Gaumont in Worcester UK. (original photo onstage in Worcester above). It was only a few weeks later that Bowie killed off Ziggy forever. What tends to be forgotten now is the massive impact he had culturally on early 70’s Britain. Here is an original review that I reconstructed from fragments (with the permission of the author, Worcester News reporter Mike Pryce), that shows how he was viewed by the more traditional Brit. (Excerpt from ‘Pretty Thing’ by Stephen Burrows).

‘All the he-men’, ‘she-men’ and ‘in-between’ men descended on Worcester last night to see their hero David Bowie. He landed at Worcester Gaumont from his planet far away, as part of his latest ‘Ziggy Stardust’ and ‘Aladdin Sane’ tour. I’ve covered loads of rock concerts at the Gaumont, from Jimi Hendrix to ‘The Seekers’ by way of Cliff Richard and ‘The Faces’, but never has there been an audience like Bowie’s. It’s as if a box has been opened and all these weirdly dressed people climbed out. Where are they all in the daytime? Do they dress like that working the lathes at Heenan’s or is it their dark secret?

Bowie is the strangest dressed rock star I’ve ever met, outside of pantomime. I’ve never met a man wearing so much female make-up and sporting such strange clothes, but he is disturbingly beautiful for a man. It’s a look his fans try to replicate, with mixed success, and the queue outside the Gaumont seemed to comprise of travellers from a charabanc spaceship from Planet Zog.

Musically, it was a great night though. With the aid of the excellent Mick Ronson and the rest of ‘The Spiders From Mars’, Bowie powered his way through his back catalogue from ‘Space Oddity’ to ‘Ziggy Stardust’. There was also a rendition of ‘All The Young Dudes’, which he wrote for Herefordshire group ‘Mott The Hoople’, plus new songs from the recently released ‘Aladdin Sane’ album.

Bowie, or is it ‘Ziggy’? It’s difficult to see a difference these days, performed throughout with huge energy, Bowie puts on a show, not a rock concert, with numerous costume changes. He jumped on the speakers, performed an ‘exotic’ strobe-lit solo with Ronson, and even climbed up the ornate embellishments of the Gaumont walls.

He finished with Chuck Berry’s ‘Around and Around’, and then he was gone, leaving us with ears ringing from the volume, back to whatever planet he comes from.’*

‘Pretty Thing’, is available from Amazon worldwide as a Paperback or Kindle ebook.

5.0 out of 5 stars A nostalgic trip down memory lane!

Format: Kindle Edition
I absolutely loved reading this book. Stephen Burrows has really captured all the excitement and fascination we all had for Bowie in the 70s. I remember vividly seeing Bowie on stage in 73 and fell in love (as we all did). I loved all the Bowie facts that rang alongside the story. Would recommend to Bowie fans but also to those who love a good story. A nostalgic trip down memory lane for me!
5.0 out of 5 stars Page Turner

Format: Kindle EditionVerified Purchase
Loved this book. Bought so many brill memories of living in the 70’s, Bowie and Birmingham. Great story line and a real page turner. 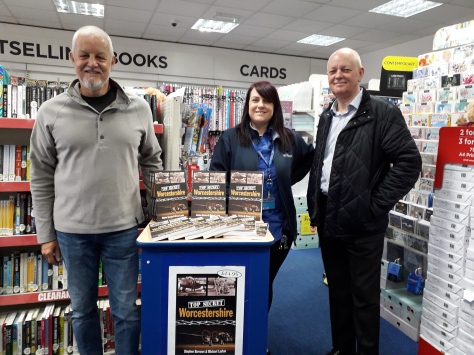 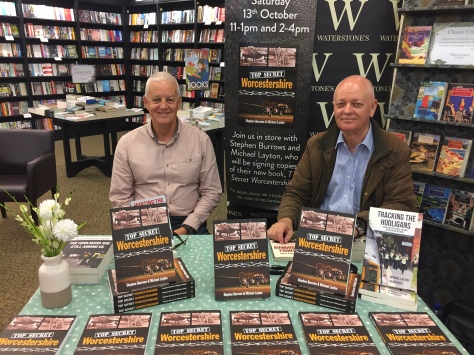 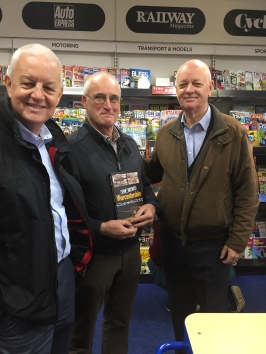 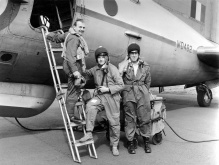 Bag yourself a great Father’s Day present – a signed copy of ‘Top Secret Worcestershire’. Meet Mike and Steve in Malvern and Evesham next Friday and Saturday.